There was a time when manufacturing was at the forefront of the economy. Nearly 2/3 of the American workforce used to work in factories and had long standing jobs that defined the meaning of hard work and industrialization. Before China and Japan emerged as valued competitors, the United States was leading the charge. In the early 1900s, the Industrial Revolution was underway. By the 1930s, automobiles could be seen in the streets, with Henry Ford helping build a new line of American made cars. Today, the world has changed with technology and internet emerging fast and IT jobs increasing in demand, while the industry that was once the building block of innovation has declined, as less emphasis has been put on manufacturing, the chain that started change in America.

A majority of us have seemed to forgotten the value that was once manufacturing. A lot of companies these days are merged together and few long standing American made brands are left. Luckily, one company has emerged among the chaos and has stayed true to the core values and hard work that defined the building blocks of their matter; Rotor Clip Company is celebrating its 60th Anniversary this year.

60 years, 6 decades: a long standing tenure of excellence. Rotor Clip opened its doors in 1957, when the company was founded by Robert Slass in Farmingdale, NY in a 2000 square foot building. There wasn’t much available to Slass and his staff at the time, but he had a vision to spread innovation through his product line and become a trusted member of the manufacturing industry. His plan worked as the company moved to the Bronx, NY in the early 1960s and then relocated to its current estate in Somerset, NJ in 1972. Since then, his sons Jonathan and Craig Slass have affirmed the daily operations of the company.

Rotor Clips products support and serve many industries including Automotive, Aerospace, Wind Power and the Military. If you were to look at the parts of a car, you would see that Rotor Clips products serve a function for nearly every component of the automobile. The graph below demonstrates this. 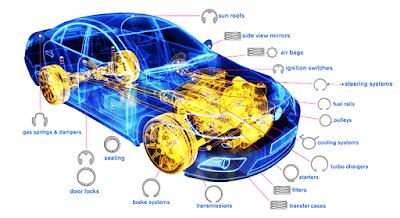 The company has been recognized for its value, receiving numerous quality awards from major OEMs, automotive manufacturers, and distributors. Rotor Clip is certified to ISO 9001, ISO/TS 16949, AS 9100 and ISO 14001.

Rotor Clip offers quality products and value-added services and solutions to support the marketplace before and after the sale. Technical assistance, product training, cost-reduction programs, design assistance, along with competitive pricing and JIT delivery make Rotor Clip a well trusted and respected manufacturer.

We all have to start somewhere and lucky for Robert Slass, he embodied a vision that has carried over to this day. This month of September marks the 60th anniversary of Rotor Clip, a testament to its product line and commitment to innovation. His sons Jonathan and Craig continue the legacy of value and prominence that started the company all those years ago. Cheers to Rotor Clip and its perseverance for being a leader in Manufacturing.


Justin Arbadji is a Marketing Assistant for Rotor Clip Company.