Bill and Melinda Gates Sponsor Their Own "Bowl Game"

They say there's no such thing as a bad publicity shot.


Well, darned if they didn't try to disprove that at the "Reinventing the Toilet"   fair held in Seattle as part of a challenge issued by the Bill and Melinda Gates Foundation in trying to find a toilet design for the 2.6 billion people in the world deprived of proper sanitation systems.  The cause is wonderfully noble, and there's real intrigue in finding a model that can be mass produced and sold on a low-price/high-volume level to those parts of the global village that are rubbing up against the modern world more frequently than at any point in human history.  These include the modernizing landscapes of India, China, Myanmar, South Sudan, Indonesia, and Cambodia (where villages that float on water are only now separating their water and septic needs ); places where public health and safety are becoming more and more a priority to keep newfound economic success going.  The Gates issued $400,000 grants to eight universities with a strict set of standards for the contest:  all designs had to be hygienic, sustainable, carbon-neutral, generate energy, and cost 5 cents per person using it in operations.  The contest gave many university and company-sponsored teams a chance to show off their innovation.


Of course, some of the PR out of this may not want to be shown, period: 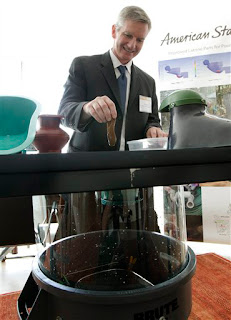 That's American Standard Brands Engineering VP James McHale smiling his brightest as he dumps simulated (we were told) waste into a container with his company's design for an inexpensive seal that can be attached to most latrine designs in South Asia.  It's a great example of a widespread problem: not preparing adequately with your publicity office.


(Also, it shows how to address the more widespread problem of poorly constructed latrines and outhouses)


Other designs presented were fascinating not just in their own individual properties, but how different they are from each other.  CalTech researchers designed a toilet powered by solar panels that not only creates hydrogen and electricity in the process but also breaks down the human waste and water into hydrogen gas as a backup power source as well.  Delft University of the Netherlands designed technology that emits microwave radiation, turning the waste into electricity. 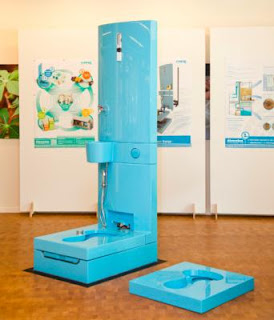 Even stranger was a design from the Swiss Federal Institute of Aquatic Science and Technology (right) that uses a gravity-driven biological membrane to re-capture water used in the flushing process.  Additional submissions included a toilet from North Carolina's RTI International that uses a  biomass conversion process  to disinfect waste and turn it into energy, and another "solar toilet" from the University of Colorado at Boulder which converts solid waste into a disinfected form of biological charcoal to be used as a fuel source.


Bill Gates posted on his foundation's site after the contest, making a very convincing case for the need to rethink the toilet, not just for developing societies, but our own as well:


"When you think about it, the flush toilet is actually a pretty outdated sanitation solution. It was certainly an important breakthrough when it was created in 1775 by a Scottish mathematician and watchmaker named Alexander Cummings. Over the decades, it led to a sanitary        revolution that helped keep deadly diseases like cholera at bay, saving hundreds of millions of lives.


But the fact that four of every 10 people still don’t have access to flush toilets proves that—even today—it is a solution too expensive for much of the world. And in an era where water is becoming increasingly precious, flush toilets that require 10 times more water than our daily drinking water requirement are no longer a smart or sustainable solution."


Installing and maintaining technology like this may be a challenge for any profit-driven endeavor.  However, with urban landscapes popping (that's "p-o-p-p-i-n-g" I wrote, there) up more and more all over the world, this is going to be an issue that will demand modern, energy-conscious solutions.  The opportunity for remaking the waste management infrastructure to fit the 21st century is there, it just takes someone willing to devote the capital needed to tackle the problem on a global scale.  Or for those of you who only think in puns: the ideas are clearly flushed out, they just need to be pushed into the future by a manufacturer willing to wipe the slate clean.


(No, to answer your thought as you read this, bloggers have no shame.)


Donal Thoms-Cappello is a freelance writer for Rotor Clip Company.
Posted by Rotor Clip at 8:56 AM No comments:

3 Manufacturing Opportunities To Meet The Rise Of The Bicycle

The complaint rings all over the country now from anyone driving on the roads:  "where did all these bicyclists come from and why won't they leave?"  After a brief decline in 2008, bicycle sales are back with a vengeance, in no small part because of the financial advantage one has in navigating the increasingly more robust urban landscapes of US cities.


Portland, San Diego, San Francisco, New York, and many other cities have begun altering their infrastructure in an effort to accommodate the growing number of bikes on the streets.  As much as automobile owners may hate it, any city worker will tell you it's a welcome alternative in dealing with overpopulation on the roads.


But this newfound surge in bicycle enthusiasm also means manufacturers have an opportunity to improve designs to make the bike more exceptional and affordable for more buyers.  As Paul Humphreys touches on in a recent article of Product Design & Development, a middle-class earner who wants to buy a bicycle will probably have the disposable income to purchase what he wants, but not splurge.  This means he or she will be looking for something cost-efficient, while at the same time safe and long-lasting; and certainly not something that's going to need multiple parts replaced as the years go by.


While the industry has been around since the 19th century, there is still, amazingly, room to improve the quality of the bicycle so that its performance and complexity do not outgrow the budget its owners must assumedly have.  The following are three areas of innovations that can clearly be improved upon for this burgeoning market: 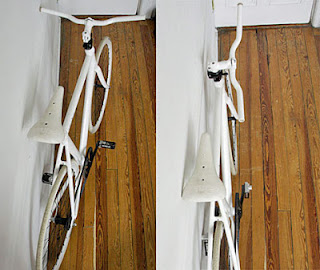 Graham Hill, founder of treehugger.com teamed up a couple years ago with Schindelhauer Bikes  to design a very simple, yet effective model for a "Thinbike" that, when its pedals and handlebars are folded, pretty much disappears behind your open door.  It's a tiny and indirect characteristic of riding but one that is crucial to be solved for the urban owner.  Space utilization drives the purchasing power of any resident in a major US city and storing your bike indoors without having to move around furniture or sacrifice a few belongings will heavily influence which future designs survive and which do not.  In keeping with this, the Cycloc , a very advanced domestic wall hanger for a bike is another design 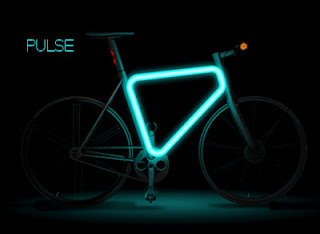 If there's one thing that freaks me out when I drive at night, it's coming across a bicyclist on the road ahead of me, not really as far to the right as they could be, with one, measly, dimly lit red light taped behind the seat.  And if that's enough to make me grip my wheel tighter as I pass, I can only imagine how the bicyclist feels.  A step in the right direction is a concept bike wheeled out by Seattle-based Teague .  The Pulse , as it's called, has LED lighting embedded in the handles and pedals, which function as signal lights (if you pause here, you can hear auto drivers everywhere collectively throw their hands up and shout "Finally!") to let travelers behind you know when you turn.  In addition, a chemically altered paint on the body of the bike glows in the dark, improving the overall visibility of the rider.  Aside from this design, Boston-based Mitchell Silva created a similar concept, using the handlebars exclusively as signal lighting sources, but making them extremely intense.  This field is clearly a hotbed of experimentation and an ideal model can still be hammered out for real-world use.


No, I don't want a bunch of bicyclists riding around watching blu-ray DVD's, but, as we've learned countless times with auto drivers, if you deprive the vehicle of any entertainment or communication accessories, people are just going to add their own, rather crudely, and sometimes dangerously.  If I had a dime for every bicycle rider I passed with earbuds jamming their auditory canals (you know the ones you need to hear cars passing behind you?) I'd have enough to buy a pair of wire cutters so I could make sure they stayed home.  That being said, there's no getting around music as a perfect riding partner, and iHome has found a way around the closed off option of earbuds.  Their Bike To Beach Speaker can be fitted onto any bike, and has iHome's patented sound technology that provides a rich sound covering a wide enough area for the rider to hear their favorite song in optimal quality.  However, this is not tech that comes with the bike, yet, and it's perfectly reasonable and feasible that bicycles of the next decade could feature systems like this to further entice buyers.

Posted by Rotor Clip at 9:09 AM No comments: