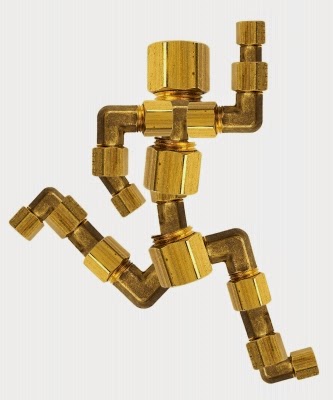 In an interview recently with The Verge, President of the Information Technology and Innovation Foundation Robert Atkinson had this quote in response to how the US should handle the dilemma of automation investment at the expense of jobs:

"That's not really what our choice is...I think our choice is continued erosion of our manufacturing capabilities and the jobs that go with it, or a more revolutionary transformation."

Therein lies the sticking point.  Despite the positive trend in manufacturing jobs and operations moving back stateside, most experts agree the elements that make up traditional manufacturing- namely a labor-based supply chain- are slowly becoming an unworkable model.  Technology is the chief reason for this, as automatic labor has now become 50 percent cheaper than human labor (McKinsey Report, Sept. 2012).  And as The Wall Street Journal recently  covered, Google's partnership with Foxconn in developing new robotics is going to take advantage of this disparagement on an unprecedented scale.

With a focus on electronic assembly, Google aims to build an all-robotic labor force.  Google also specified it intends to use automation in competing directly with Amazon's manual labor (Don't let the recent PR hype around drones fool you: Amazon's manual labor is still the driving force behind the company).  This is truly heading into unchartered waters, but if we're to look back on the past hundred years of technological advancement, it's pretty good odds that those waters are inevitable: robots will be a major part of factory labor, on every level, in almost every sector.

This really comes down to that "revolutionary transformation" Atkinson spoke about.  The issue is no one knows what that transformation is going to be.  What does an employment landscape without traditional manual labor look like?  How can you keep an economy going without it?  There's a real risk that if the US isn't prepared with ways of transitioning low-wage workers to new jobs of the future, the country will be stuck with a massive and permanent unemployment class- or worse, the entire economy collapses.

However, with the right kind of thinking (re:outside the box), it is also entirely possible we discover whole new jobs and industries as this new century continues.  Last year, Scott Winship made a valid point in an article regarding the long-term perspective of technology replacing labor.  He argues that of course, there is a correlation between insecure low-wage jobs and workers not given the opportunity to accrue employment skills.  While it would seem technology would only box in those low-wage workers and take even more opportunity away, he notes: "In all five decades from 1950 to 2000, the share of workers in high-wage jobs rose faster than the share in low-wage jobs, but the pattern was reversed from 2000 to 2007."

We've had technological improvements, specifically in computers and automation, since the early 20th century.  Yet, not only was employment unharmed overall, it had improved in wages up until the beginning of this century.  That's because up until then, traditional labor was being buoyed by technology; it's only the last decade that it's been surpassed by it.  So technology itself is not the culprit: it's the lack of investment by everyone, public and private, in manual labor that can complement said technology.  How to address this?

There's no smoking gun yet, but an updated education effort on the national level, a greater emphasis on thought-based jobs, and a willingness to rethink what should and shouldn't be a "job" in the 21st century, could all be a good start. 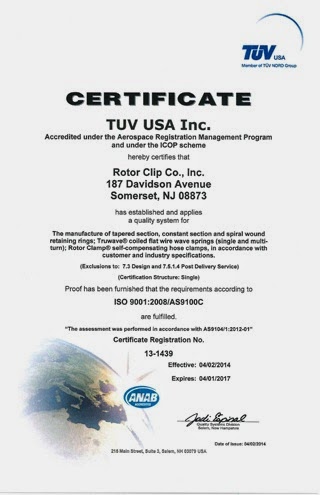 Rotor Clip has taken another step in its goal to continuously improve its products and processes and increase overall customer satisfaction by recently meeting all the requirements for an AS9100 certification.

In addition, the industry has at its disposal a technical engineering staff to advise on the most economical way to use its products including suggestions on the best type, dimensions, material, finishes and packaging to use for a particular application.

According to Sara Mallo, VP of sales, the certification is good news for Aerospace customers looking for additional sources for these products.

“We’ve always prided ourselves on offering choice to our customers in the type of retaining rings they purchase,” she said. “We’re now pleased to offer the same type of choice to the Aerospace industry.”

Mallo noted that the process of applying for the AS9100 has been “extremely positive,” enabling the company to uncover key areas of improvement and a greater command of our manufacturing processes.

“What we have learned through the AS9100 process is how to take our current lean thinking and improve upon it to provide our customers with an exceptionally high level of quality, reliable products delivered when and where they need them.”

Posted by Rotor Clip at 1:14 PM No comments: