Rise of The Microgrid


With global instability on the uptick in multiple ways, many industries are reconsidering even the most basic of traditional models. The recent horrors Hurricanes like Maria and Irma inflicted exposed the fragility of the standard energy grid, and proved that, while the US national grid may not be as vulnerable to natural disaster everywhere, it could very well need to adapt in order to survive.

In this context, the microgrid as an option can be seen as a national asset. Microgrids, a largely American phenomenon so far (almost 54% of all microgrid systems are in the US),  are site-specific energy infrastructures designed to work within the greater energy grid while also functioning independently. Moreover, because they are designed to distribute energy locally, microgrids do not lose as much in transmission, and so are very cost-efficient.  Most microgrids are also designed for flexible integration, so as technology improves, they can adopt innovative models without needing to be remade, which usually results in costly shutdowns for traditional grid services. 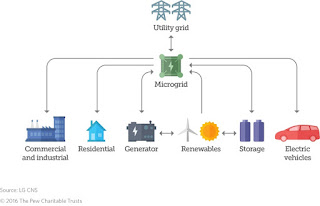 At the recent COP23 Conference in Bonn, Germany, microgrids were a chief interest among investors and government officials, alike. Pittsburgh Mayor Joe Peduto represented his city’s brugeoning microgrid community, which has demonstrated itself as quite ahead of other areas of the field. While still in development, the existing microgrid, created and implemented at the nearby University of Pittsburgh engineering department, has already been planned to complement other nearby microgrids, resulting in a chain system. This design is ideal for a mid-sized city like Pittsburgh, which may see population and business fluctuation in an uncertain future, and can unlink or link its multiple energy grids with ease, depending on demand.

In addition, microgrid technology has the extra advantage of being an ideal line of defense against cyberwarfare. Because of their flexibility within the larger grid, microgrids can be both connected and disconnected- a process called “islanding”- when cybersecurity compromises the integrity of national systems. With this in mind, defense interests have a good reason to consider how to assist in quick and efficient microgrid integration.

The success of microgrids in natural disasters has alreadybeen demonstrated in the past few months. While Puerto Rico and St. Croix continue with majority power loss, other Carribbean islands that were already implementing microgrid technology had working water and electricity the day after Maria passed them by. St. Eustatius made good use of its 4 megawatts of solar energy as well as battery storage and inverter infrastructure. Necker Island (home to Virgin Group owner Richard Branson) was also able to sustain damage from Hurricane Irma, even to its solar panels, due to its state-of-the-art microgrid.

As America looks forward, the idea of the small-scale model seems more and more beneficial for businesses looking to revitalize communities sooner rather than later. The microgrid not only already benefits from a proven track record, but a climate of necessity, as well.


Donal Thoms-Cappello is a freelance writer for Rotor Clip Company.
Posted by Rotor Clip at 12:54 AM No comments: