NYU Researchers Make A Tractor Beam: Sci-Fi Geeks Cheer, Almost Tell Hot Girl Sitting Next To Them In Library, Think Better Of It 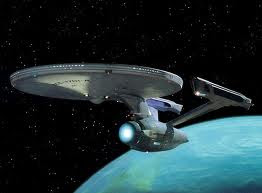 I try not to waste this blog on stuff that wouldn't be considered "signiﬁcant" relative to US manufacturing in its current state. After all, we all only have so much time to devote to interesting news in between the grind. If you're reading this, you decided to take a risk with that sparse time of yours. I know this and I try to respond in kind with stories having to do with the here and now, which tends to be pretty important to know.

But every so often, I come across some weird story that may not be directly considered newsworthy now, but darned if I'm not rooting for it to be in the future. I'm referring to the recent bit of news coming out of New York University that should electrify all our inner geeks back to life.  From NewScientist:
"In 2011, researchers in China calculated that a type of laser called a Bessel beam, which puts out light in concentric rings, could be designed to make a particle inside the beam emit photons on the side facing away from the beam source. These photons should allow the particle to recoil towards the source. But nobody has so far managed to put the idea into practice.
David Ruffner and David Grier of New York University instead projected two Bessel beams side by side and used a lens to angle them so that they overlapped, creating a pattern of alternating bright and dark regions along the length of the beam. Fine-tuning the beam causes photons in the bright regions, initially ﬂowing past a chosen particle in the beam, to scatter backwards. When these photons hit the particle, they knock it to the next bright region. The particle is thus constantly pushed close to the beam's source."
-Jacob Aron, NewScientist.com , 10/23/12
Or perhaps more appropriately put by Ian Chant of Geekosystem:
"You guys, hold the phone. Drop whatever it is you're doing now.      Is it  dropped? Yes? Good.  We have tractor beams now!"
-Ian Chant, geekosystem.com, 10/22/12,

Yep, though on a very, very small scale, researchers at NYU were able to create a straight-out-of-sci-ﬁ tractor beam.   For those of you feeling too entitled to care about anything sci-fi because you were too busy scoring both in dating and on your Varsity fill-in-the-blank team back when you were a teenager, a tractor beam is a concentrated beam of light with enough energy to generate a force that pulls one object toward another.  While many works of fiction have imagined the concept being used in the future for large-scale scenarios like space-docking or construction, in reality, a tractor beam is seen as an ideal tool for industries and applications on a microscopic level.


So how does it work? The key to all of this is the marvelous world of Bessel beams. Yes, the very ones you learned about in 5th grade science class (before you parrot that to your co-workers, please know that I'm kidding). Bessel beams basically send light in concentric circles, so they have the unique ability to reform after they pass an obstruction (of a relatively small size). they're used in optics a lot to view what an object obstructs by reassembling photons behind it. What Ruffner and Grier apparently did was add a second beam and alternated how each beam was phased together. The object caught in between was moved by the photons in the interacting beams with each alteration. You can attempt to read more on Grier's research page but be warned: there's math.

Ow, my head...and sense of self-worth.

Granted, the beam itself is almost microscopic, as well as the tiny bits of silica used as test subjects, and it may literally be a "parsec"- or for you kindred spirits out there, one-twelfth of the Millenium Falcon's "Kessel Run" - before something like this can even get close to being demonstrated as a real-world prototype.
Still, this is pretty mind-blowing, and definitely unprecedented. It's not really a natural occurrence in the physical world to see light actually pulling matter. If research reveals new ways to mobilize objects with more mass, think of all the small-scale operations that could beneﬁt from using light beams to move parts and targets instead of mechanics; computer chip data processing, brain surgery, and bio-cell research to name a few off the top of my head. Moreso, who's to say we can't develop large-scale tractor beam technology?  What if we build giant "Bessel Beam Projectors" a thousand times more concentrated- is it impossible to rule out pulling objects in space with only guided photons? Judging by NASA's recent exploration in the ﬁeld, they're curious to know, themselves. 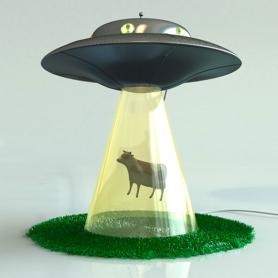 Time, lots and lots of it, will tell. (Oh, also money, money will probably be part of the conversation too). This idea has potential, though. In fact, many ideas derived from science ﬁction have proven their value beyond the imagination before, from hovercraft to quantum theory. A little investment and a lot of patience may make the tractor beam the next viable candidate.

Colorado Entrepreneur Designs Football Helmets With Airbags; Ndamukong Suh Asks If He Can Still Stomp On People, Is Told "No" 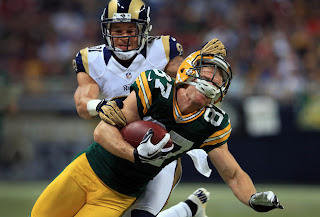 The next manufacturing opportunity in the world of sports may also solve one of its most dangerous and pervasive problems.


The latest issue in the NFL over new research revealing the horrendous effects of concussions has led to a sometimes heated national discussion (check out The Concussion Blog for a good rundown if you need to catch up) over whether and how the game will change by taking the more aggressive plays out.  Will football become less fun to watch?   Softer?  A decidedly un-masculine musical number?  According to a few die-hards, in a few more years the Super Bowl is going to look something like this :
But where some see a decline of the tough version of America's #1 sport, others are partaking in the other American tradition of using new information to make a new product.


The potential opportunity in question would be Colorado-based Concussion Mitigation Technologies' new design for a football helmet with airbags.  Yes, the same invention that stops your head from going through your steering wheel can-with precision and the assistance of a data-driven safety system-hold it in place if someone like David Stewart or Richie Incognito decide they want to try to take it off on the gridiron. From the pages of Design News:


The company's helmet will incorporate multiple strain gages, a small cartridge of carbon dioxide (CO2),   scores of tiny airbags, a lithium battery, and a printed circuit board with a microprocessor, memory, and analog-to-digital converters.  On field, the helmet will use the strain gages to measure the impact of a hit.  Then it will send the data to the microprocessor, compare it to software models in memory, and pressurize the airbags with CO2 when necessary.


A common misperception is that the risk of long-term brain trauma comes from lack of structurally sound helmets.  Quite the opposite; most helmets are too good at their jobs, holding the skull in place to where it acts as an inflexible wall against the momentum of the brain.  This has been cited by all studies as the true culprit of the kind of damage that has led to an unbelievably tragic pattern of ex-NFL player suicides which include Ray Easterling, Andre Waters, and most notably Junior Seau.
Troy Fodemski, founder of the organization and the concept, believes that tiny airbags planted throughout the helmet may not completely protect the brain from impact, but with the sensors tracking by microseconds where the brain's trajectory heads, airbag deployment can slow down the motion and bring the organ back to a neutral position in the head more quickly.  "The human brain wasn't made to withstand 80 G's in 15 milliseconds", Fodenski told Murray. Virgina Tech, which has had an ongoing partnership between its football and biomedical engineering programs to measure the severity of head injuries in the sport, has registered forces up to 100 G's.


Averaging out to a price range near $1000, this is clearly not ready for the market just yet.  But with a game on the rise in popularity and the nightmare possibility of NFL-vets lining up for individual lawsuits against the league, the demand is not going away.  Clearly, to ensure the safety of all players of the game both young and old, something is going to have to be done.  Fodemski's helmet could and should be a step in the right direction.
Donal Thoms-Cappello is a freelance writer for Rotor Clip Company.
Posted by Rotor Clip at 8:49 AM 1 comment: