"UFO" Houseboat Brings the Tiny House Concept To The Ocean 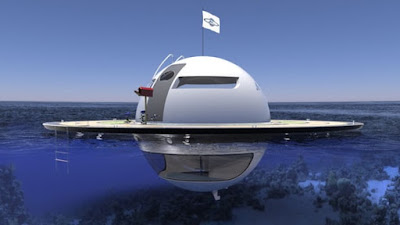 Off-the-grid lifestyles seem to be all the rage these days, and the tiny home trend is a an excellent reflection of this. Having a small, sustainable habitat has become more and more enticing to younger generations looking for cheaper alternatives to traditional homes, even if it means a bigger price tag up front. Italian-based company Jet Capsule , however, has taken this movement to a whole new level.

Sea level, that is.

The company, which manufactures yachts, has designed plans for a pod-like concept home that floats in the ocean. This "Unidentified Floating Object" will not only include 322 square feet of livable area, but also an off-the-grid energy apparatus including onboard solar panels and wind turbine as well. The fiberglass pod would include a fresh water generator, a vegetable garden on its outer rim, and an economic, slide-out kitchen. While it can cruise on its hydrojet propellers at a rate of 4 miles per hour, the pod's elastic anchor system ensures it won't capsize in stormy weather, provided it's docked in shallow water.

One could see an issue if a vessel that moves this slowly had to gamble long distances with the risk of an approaching storm. Nevertheless, while it may not be an impervious home, many interests of the future dovetail with this design. The prospect of living off the grid, with the opportunity to travel to exotic locations, can appeal to all generations, whether green-minded or in retirement mode. And while the prototype Jet Capsule is promising currently demands a total of $800,000, the owners project the model could cost as low as $200,000.

More than a standard yacht, but less than your average home.

What was once considered appropriate for hobbyists now takes a different meaning in the context of the maker, DIY movement. The machine has a 12" x 18" bed and can even have its noisiest component (the pump) stored in a separate room. These features make it ideal for small businesses who, while they may have low volume orders compared to franchises, still need to produce original products faster than the speed of hands.

The major advantage of Wazer's product is the surprising effectiveness water and sand has compared to other laser and plasma technology in cutting. The machine issues a stream of water and garnet at a pressure somewhat less than industry standard but at different speeds, depending on the choice of raw material. While Wazer's cutter sacrifices a tiny bit of precision, it can make accurate cuts through one inch of almost any material provided. Steel is no issue, but even paper can be carved in creative methods without dissolving. In addition, the variety of possible materials even gives Wazer's product an edge over current 3D printing methods for start-ups looking to create prototypes. As Wazer CEO and co-founder Nisan Lerea says to TechCrunch:

"The problem with 3D printing,” says Lerea, “is that you’re making something out of relatively fragile plastic. With water jet technology, you can create prototypes out of the materials that will be used in the final products. If you need limited production runs, you can even do small-batch manufacturing with this machine, which doesn’t work with most 3D printing technologies.”

Although the owners- who began this project as an academic experiment at Penn Engineering- do not believe water cutting will reach beyond niche markets. they have a very clear vision as to who those markets will be. “One of our test users is a jewelry maker who creates beautiful pieces out of coins,” Lerea continues. "Each piece she makes costs $5-600. The problem is that it takes her forever to make each piece. We can help her make more jewelry with better consistency, faster.”

Wazer's Kickstarter goal of $100,000 is all but in the bag, and as it centers on a resource more and more finite in a world of droughts and environmental instability, it would be interesting to see if the company ever considers plans to integrate resuseable water in its models.

Donal Thoms-Cappello is a freelance writer for Rotor Clip Company.
Posted by Rotor Clip at 1:12 PM No comments:

The 2016 Land Art Generator Initiative entries are no less than breathtaking. The competition, intended every two years since 2008 as a way to blend public art with sustainable energy in architecture and design, centered this year's theme around clean water. The subsequent concept works from all over the world are now officially open to the public at the Annenberg Community Beach House in Santa Monica, California until November 1st, and the competition's panel has just announced its winners.

The purpose of the exhibits were not only to celebrate innovative aesthetic designs, but also to explore possible futures for infrastructure that can harvest clean energy while integrating into existing societies in ways that please the eye. As recent history has proven, local communities that don't want their landscapes altered have proven a necessary constituent for clean energy advocates to win over.
Having this year's initiative in Los Angeles- a city wracked by years of drought- made it a perfect opportunity to search for ideas built around water infrastructure. The designs were shown throughout the previous months at the iconic Santa Monica Pier. Highlights included a "Giant Orb" design by a Korean group of artists/architects that not only provided its own energy to stay buoyant, but also uses solar powered panels to generate drinkable water as well, producing an annual amount of 600,000 gallons.


Second place was a US-based effort, created by University of Oregon. The ingenious design, inspired by whales in shape and utilizing high end reverse osmosis, (a process that is perfect for a marine location) can generate over 4300 megawatts of electricity and 172 million gallons of drinking water. Engineers in Pittsburgh took third place with "Paper Boat" . A network of iconic paper coat shapes that mask an underwater apparatus, where coral and kelp, encouraged by electrical currents from on-board solar cells, will grow and provide more habitats for diverse marine life.First place was taken by Tokyo-based Chrostopher Sjoberg and Ryo Salto, and is called the Regatta H2O. The concept involves aesthetically beautiful sails that collect and store wind energy, while also producing fresh water through fog harvesting. The project is estimated to create over 30 million gallons of water per year for local Angelinos.

Perhaps the boldest entry, was "The Pipe", designed and manufactured by Canadian-based Khalili Engineers. The Pipe features a solar-powered, electromagnetic desalination system that is capable of generating over 1.5 billion gallons of drinkable water each year. That kind of volume could make a real and immediate difference in local Angelinos who grow more and more each year, putting ever-mounting pressure on a city losing fresh water options with each dry summer that passes. It may not have placed, but The Pipe is the kind of grand thinking more experts in all industries and arts should explore in for the challenges of the next century.


Donal Thoms-Cappello is a freelance writer for Rotor Clip Company.