The Era of Drought-Coping-Manufacturing Is Here

In the western US, it's time to face the very real possibility this half-decade-long drought is not going away anytime soon. Snow-capped mountains in Southern California are a thing of the past, and water conservation has moved very sharply into the collective consciousness of the public mind.

Consequently, the time has come for technological advancements dealing with water sustainability to move out of the R&D labs and into real world application. Already, there are several interesting ideas making their way either through resident or public use. They include:

Global Design Company Ideo has multiple irons in the fire when it comes to originality. However, Will Carey, one of its directors in San Francisco, has taken an old idea- harvesting moisture from the air- and re-imagined it. Researching the design of the desert-based Stenocata beetle shell, Carey came up with a water-harvesting fog catcher easy to make and maintain for any Bay Area resident. After successfully building a micro fog catcher good enough to provide him water for coffee every morning, Carey then built bigger "panel" models, and mounted them on the roof of his apartment complex. How much water do these larger catchers provide the tenants? Enough for the toilets and short showers.

Recently, Los Angeles dumped over 96 million small, plastic shade balls into its reservoirs as part of a $35 million water improvement plan. At $.36 a piece, the balls are a cost-effective way of preventing two natural events from sunlight that have a surprisingly costly effect on the city's water. One is evaporation; the other, unhealthy chemical reactions when ultraviolet light hits the added chlorine used to keep the drinking source clean. In addition, the balls prevent algae bacterial buildup. City officials estimate the shade balls will save over 300 million gallons of water every year.

But the more important innovation coming out of LA could be LADWP's recent announcement of a city-wide plan to capture rainfall from running off into the ocean, sanitizing it, and redistributing it into the city's drinking supply. Surprisingly, Los Angeles and most other cities still rely heavily on snow pack that melts during the Spring. While the process is a natural system in how the local Sierra Mountains fertilize lush surrounding valleys, it takes a long time and travels long distances before replenishing LA's drinking supply. What's worse, this past year recorded the lowest snowfall for the Sierras yet: just five percent of its normal levels. Clearly the city cannot rely on them anymore for the millions of residents that surge in population each year.

The good news is rainfall levels, while uneven, are still adequate enough to be a potential water source. This is going to require a major overhaul of Los Angeles' infrastructure. After cutting their water use by 27 percent this past year, Californians get the gravity of the situation, and there is enough public support for ambitious development. LADWP is aiming high: $200 million worth of "case-by-case" conversions. The methods include strategically-placed gardens for bioretention, "green streets" with permeable pavement, and underground basins.


When Elon Musk published his 57-page alpha white papers on the concept of a Hyperloop back in 2013, he made a clear intention that they were for some other ambitious group of innovators to take and run with, as he had a bit on his plate already.

Little did he, or really anyone, suspect someone would take up his challenge so quickly, but that is precisely what Dirk Ahlnborn and others did when they created Hyperloop Transportation Technologies. Through successful marketing and crowdfunding efforts, the start-up has made incredible strides in introducing Musk's core concept to real-world applications. 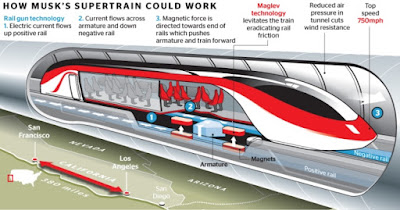 Just recently, Hyperloop Technologies announced a partnership with Oerlikon Leybold Vacuum and global engineering firm Aecom. In exchange for stock options, both companies will facilitate their employees' expertise in how to make Musk's initial vision of a pneumatic tubing network firing passengers across the country a reality. The location of a future prototype has already been chosen the silicon valley-engineered "Quay Valley" that will be situated in between Los Angeles and San Francisco. With more investment, Hyperloop Technologies hopes to have a 5 mile test track built there. The speed at which the concept is developing into actual application illustrates how contagious a good idea can be, and how it can even trump traditional monetary benefit for those who understand its importance. From Wired :

"The startup also announced today that it has 400 'team members' working on the project. They aren’t employees, but women and men with regular gigs at places like NASA, Boeing, and SpaceX, who spend their spare time on Hyperloop in exchange for stock options"


While the interest in the idea owes itself to Musk's white paper publishing, it's worth mentioning his real intention for introducing the idea was to criticize California's high speed rail project- or rather its price tag. Because of this ulterior motive, it has always been tricky to gauge how serious Musk's commitment to the idea really was. That certainly changed in June, however, when the billionaire's company SpaceX announced a competition to design the ideal pod to house passengers for a future Hyperloop project. While the competition only covers one aspect of the incredibly complex endeavor, it proves Musk believes enough in the merits of his idea that he is willing for SpaceX to devote time and money.