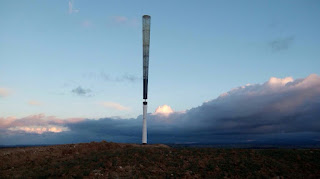 The collapse of the Tacoma Narrows Bridge in 1940 provides a textbook example for physics students about the dangers of overestimating the force of oscillation and aeroelastic flutter.However, not everyone has taken it as a lesson in what to avoid, but rather how to capture the dangerous phenomena and put it to good use.

Vortex Bladeless, a start-up company based in Spain, has introduced a new type of wind turbine built around the idea of oscillation including a distinct feature: no blades. The bladeless turbine, invented by Daniel Yanez, generates energy not from a basic "windmill" design, but by oscillating to and fro as wind swirls around its cylindrical top. This is essentially using the principles of vorticity to harness the power of the wind, ironic in that prevention of vorticity has been the lesson most engineers have taken from the fate of the first Tacoma Bridge.

"This is a very good way to transmit energy from a fluid to a structure,” Yanez explains. Not to mention save money. The design has no excess gears or bearings needed to hold things in place, and does not come in fractured pieces that do not fit a standard storage transportation unit (unlike blades, which demand more customization for delivery the bigger each model gets). The cylinder poles in Yanez's design would also take up less space, cost half the amount of standard wind turbines to manufacture, make less noise, and crucial for the environmental lobby, be of minimal risk to birds' flight paths.

Of course there are downsides; being more lightweight taking up less area of wind to harness means less conversion energy. Wind turbines usually have a rate of 90 percent kinetic energy conversion, while Yanez believes his model will amount to somewhere around 70 percent (it also bears reminding Yanez and his partners have only built one miniature prototype right now). Also, there are those who question the idea of an oscillating pole being silent, especially at the size it will have to be in order to produce anything worth investment. “The oscillating frequencies that shake the cylinder will make noise,” says Sheila Widnall, an aeronautics and astronautics professor at MIT. “It will sound like a freight train coming through your wind farm.”

Vortex has already received about $1 million in venture capital to work with; it hopes to receive $5 million more to help build a larger version of its current prototypes. While Yanez and his compatriots agree there is a long way to go, if they have hit upon a model of wind turbine that can be improved and developed for more efficiency of space and integration into densely populated areas, they may have just invented the next generation of wind infrastructure.

Posted by Rotor Clip at 1:40 PM No comments:

The Battery May Have Just Changed...and Changed All Industry With It

Ask industry experts what's really holding alternative energy back, and even Elon Musk would admit: it's the stalling out of the battery.

The lithium ion battery, although a reliable source of energy storage, has simply hit a ceiling of efficiency with how much energy output it can give versus how expensive it is to manufacture. No one has been able to make any headway in finding a way to boost the energy output while minimizing cost-efficiency.

Until now. 24M, a battery start-up that has been in stealth mode for almost five years, has now emerged publicly to present a brilliant package of innovations that will most likely change the battery industry and the entire energy sector. 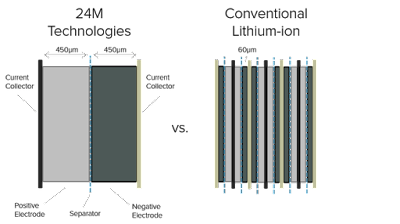 While they did not change the overall chemistry properties of the lithium-ion battery, they may have done something even better: discover a process of manufacturing that builds a lithium-ion battery faster and cheaper, with more energy capacity. Dr. Yet-Ming Chiang, co-founder, chief scientist, and a lifelong MIT mind, gave an incredible interview to Quartz about the journey he took in going all the way back to the drawing board with the battery. At one point, the start-up company had thrown all its bets onto the prospects of creating a new model flow battery (a design where unlike traditional solid cells, the cathode and anode would be delivered and maintained through two storage units of liquid.) But while the flow battery model had come with cheaper materials, one the size of a nuclear reactor would be needed in order to have a prayer of competing with gas fuel.

Chiang, to his credit, recognized when to re-prioritize. He went back to the traditional lithium-ion cell models and realized something that had been overlooked; the original manufacturers of lithium batteries was Sony, and they had done so on the same machines used to create magnetic strips for the dying cassette tape. From Chiang's interview in Quartz:

The result was the first lithium-ion cell, which Sony commercialized in 1991...But Sony also had to quickly figure out how to manufacture this new kind of battery on a commercial scale. Providence stepped in: As it happened, increasingly popular compact discs were beginning to erode the market for cassette tapes, of which Sony was also a major manufacturer. The tapes were made on long manufacturing lines that coated a film with a magnetic slurry, dried it, cut it into long strips, and rolled it up. Looking around the company, Sony’s lithium-ion managers now noticed much of this equipment, and its technicians, standing idle.

It turned out that the very same equipment could also be used for making lithium-ion batteries. These too could be made by coating a slurry on to a film, then drying and cutting it. In this case the result isn’t magnetic tape, but battery electrodes.
This equipment, and those technicians, became the backbone of the world’s first lithium-ion battery manufacturing plant, and the model for how they have been made ever since. Today, factories operating on identical principles are turning out every commercial lithium-ion battery on the planet.

The machines were big, and their process was slow and expensive. They were a large part of the reason batteries couldn’t compete with gasoline. It was time to correct that mistake and figure out a new way to make the battery. “We got sidetracked by a historical accident and a reluctance to switch to something that works (better),” Chiang said.


Chiang and 24M were able to remove 80 percent inactive materials, simplify the layers inside each inidividual cell (from 24 to 5) and cut the time it takes to create one cell from 22 hours to a couple minutes. The average capital needed for an entry-level battery plant is $100 million. Chaing belives these innovations in process alone can knock the price down to $10 million; a very reasonable amount for smaller start-up companies to compete with larger battery giants.

More importantly, these efficiency changes, if they really can be duplicated on a mass level, now make batteries a direct competitor with the oil and gas sector. Heavy expensive batteries have been a literal and figurative anchor holding down the 21st century ideas of electric cars, and off-the-grid housing. With the help of Chiang and 24M, the anchor has just gotten a lot smaller.