Anyone who's ever witnessed  a space launch has a pretty fair comprehension of just how much power energy, and therefore, money, must go into the effort of getting a multi-ton apparatus of metal, composite, and computer systems off the ground and out of the Earth's gravitational pull.  So far, we've had one way of doing this: launching a shuttle with rockets pointing straight up in the air.  Makes sense, of course, since that's the place we're trying to get said shuttle to, right?  Shortest distance between two points and all that...

But it may not be the most efficient if you believe HyperV Technologies,  a start-up out of Chantilly, VA.  HyperV is re-defining our basic assumptions about the space launch with a prototype called the "Slingatron".  The Slingatron uses the physics behind the slingshot as a mass accelerator, essentially swinging a vehicle round and round until literally hurtling it into the sky, where rockets will kick in and handle the rest of propulsion.  The idea is this process significantly cuts into fuel and raw materials needed in the launching process. 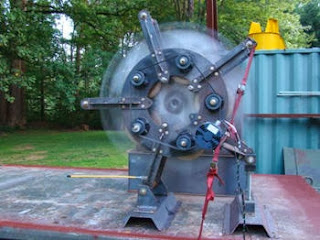 In theory, the whole concept is interesting.  Applying it, however faces lots of challenges.  Firstly, the amount of g-force needed to achieve that kind of acceleration with that much mass would almost certainly kill anything living, so human cargo is out of the question.  Also, the site states a goal of getting objects into a Low Earth Orbit (LEO) of 7.6 km/sec, which in and of itself will take a large amount of energy to achieve, and that doesn't take into account air resistance either.

Perhaps the most exciting aspect of HyperV's campaign, however, is how it is going about its fundraising.  The company has begun a kickstarter campaign with a goal of $250,000 in order to build a slightly bigger prototype than the one they have.


Sure it's not exactly the most ambitious goal compared to most private space projects, but it is part of a growing trend of space and aeronautic tech ideas being marketed to the general public not only for awareness but for good ol' hard capital as well.

Posted by Rotor Clip at 9:04 AM No comments:

ISM Report Shows The Worst May Be Behind Us

Recent articles I've done on the manufacturing trend in the US have always been in the context of the damage done in employment from the Great Recession.  Whether reports  delivered mostly good or bad news, there was always a general sense behind the numbers that, though manufacturing has widely been regarded as the darling of the recovery, the sector was still at the mercy of the larger, dreary, economic outlook along with every other sector in the country. 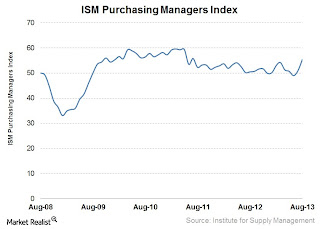 Yet, the Institute of Supply Management's (ISM) latest Performance of Manufacturing Index (PMI) indicated an August  factory activity index of 55.7, slightly higher than the 55.4 percent in July, and a significant jump from 50.2 percent in the month of June.  This follows recent reports as far back as Spring of 2012 where the ISM report was indicating growth indexes under 50 percent, meaning the sector was shrinking, rather  than expanding.  And it's not just factory activity; to quote all the statistics in the report by Bradley J. Holcomb, ISM CPSM, CPSD, and chairman:

This marks the sixth month in a row of general economic growth, the third consecutive month of growth in production, and perhaps more telling, the highest level of growth in production since May of 2004, with 13 of the 18 overall American manufacturing industries reporting expansion of some kind (although it's a little worrisome that one of the industries reporting contraction in July is machinery).

Is it safe to say the economy, on the back of the steady expansion of American manufacturing, is out of the woods?  Probably not.  However, past think-tanks and index reports had been careful to view all numbers in the context of phrases like "double-dip recession", "stagnation", and "holy hell's bells, the sky is falling".  The general stability and consistency this portion of the calendar year is contributing to an overall optimistic outlook moving forward for the US economy.  And it's nice to know that through it all was the steady hand of the manufacturing sector.  Let's hope it continues.