I've posted blogs before on the new ways inventors and developers are thinking about making the world's waste management systems cheaper and more efficient in energy usage.  It makes sense that, since this is an aspect of society that is incredibly arcane in design, manufacturing could play a huge role in its upgrade.  Unfortunately, the kinds of ideas out there involve so much reform of current infrastructure, it's impossible imagining the kind of political and financial gumption required to make any of them happen in this particular reality.  That being said, there's no reason we can't improve on existing infrastructure:

This new form of harvesting electricity from wastewater actually relies on a decade-old technology called microbial fuel cells.  The name says it all: microbes and their consumption process are isolated and the energy given off is harvested.  In this case, a simple electrode twin-chamber apparatus does most of the work.  As articulated by Bruce E. Logan PhD, who heads a research group in Penn State University, the trick is merely to separate bacterial microbes in an air-tight chamber so the electrons given off can be funneled through a circuit before bonding with oxygen atoms. 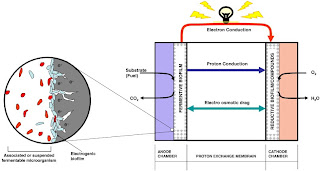 While the idea is simple in concept, as Logan explains in the video, so much has to go right to implement it on the large scale, that more has to go into the R&D side of the project first.  However, with each American using 70 gallons a day in water, electricity demand is only going to rise (rise is too nice of a term to describe it: it will skyrocket).  If we're not going to address it on the larger scale, small tweaks like this one may add up to address it on the smaller one.

Posted by Rotor Clip at 7:09 AM No comments: 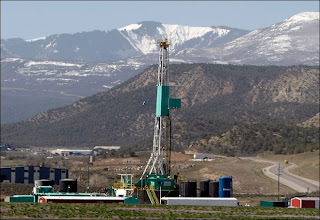 Contrary to what the prevailing notion is, there are some of us in the manufacturing community that view the US shale gas boom as welcome, but temporary.  A quick look at history shows us that we've been here before.  In post-WWII America, we discovered that established rates of domestic oil production would result in exhaustion within the century, thus beginning a long and arduous foreign policy of investment in resources located in some of the most inconvenient and politically dangerous areas of the world.

And while new techniques in harvesting natural gas have enabled the US to be master of its own destiny for a time, it's important to keep in mind we're still dealing with a finite resource that, just like all other previous finite resources we've used, will eventually run short.  With that in perspective, even more innovations, techniques, and designs will be required if we want to continue on the road of true energy independence. 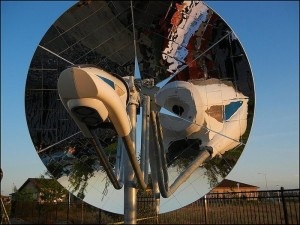 One such innovation that may have a huge impact in the immediate future is a new method developed by the Department of Energy's Pacific Northwest Labs.  Using a mirrored parabolic dish, the sun's solar rays are concentrated like a magnifying glass into a central point.  This concentrated solar power is then directed to a device made of a chemical reactor and heat exchangers, which use the solar energy to heat flowing natural gas, converting both into syngas; hydrogen and carbon monoxide.  The result is a whopping 20 percent less natural gas used to run the power plant.  Scientists at the lab also believe they can eventually create a model where the electricity produced by a hybrid syngas power plant would be just 6 cents per kilowatt/hr by 2020, a very competitive rate.

The process still has a long way to go, but with all the hits the solar investment landscape has been taking these days, this is a promising development.  Solar energy standing on its own as a longstanding, stable energy alternative has been a hard sell; solar being used as an augmentation for existing energy models, on the other hand, could be a very intriguing aspect.