I have to admit I didn’t expect much when Craig Slass, Co-President of Rotor Clip, asked me to join him for a test drive of the Tesla Model S electric car. I was expecting to encounter a “work in progress,” a vehicle whose technology was promising but not quite there.

I was in for a surprise.

The exposed chassis of the car on display in one of the two show rooms in New Jersey, The Mall at Short Hills (the other is located at the Garden State Plaza Mall), was stark. There was a cylindrical shaped motor that drives the rear wheels and a few assemblies up front, but that’s it. The vast space between the front and back are for batteries. Hood and trunk are storage spaces. It’s hard to believe this vehicle could function with so few components.

Craig got behind the wheel and after a brief orientation from Owner Advisor, Andrew Chae, eased the car out of its mall parking space and into the traffic of nearby JFK Parkway. I was sitting in the back seat with Craig’s son, Jacob. The car was stylish and comfortable with a lot of the bells and whistles you’d expect to find in a new vehicle.

But it was the handling and power that most impressed me. The acceleration was smooth and quick, driving me into the seat like a plane about to take off. It was hard to believe the car delivered that kind of power without relying on an internal combustion engine.

We cruised across Columbia Turnpike and into the nearby town of Livingston. Craig had no trouble weaving in and out of traffic, passing at will (which is his way) calling on a burst of speed now and then that was worthy of any luxury car on today’s market.

When we returned, Craig sat down with Andy and reviewed the cars options including colors, sun roof, interior materials as well as other stats. These included:   236 miles on a single charge; three hours of charging time for every 100 miles from your home charger; or, 20-30 minutes for a full charge at a charging station. (It doesn’t cost you a cent—that seemed impressive).

The batteries will last about 8-10 years; you can choose to replace them at that time which would run about $10,000.

Our test drive was on the heels of New Jersey’s ruling barring Tesla from selling its cars direct to consumers through its two mall locations. New Jersey Governor, Chris Christie, said the fault lies with the State Legislature, “…which says if you want to sell cars in this state, you must go through an authorized dealer.”

“My job is not to make the laws, it's to enforce the laws. And Tesla was operating outside the law,” he said.(http://www.nj.com/politics/index.ssf/2014/03/chris_christie_blames_njs_controversial_tesla_ban_on_state_legislature.html. NJ.Com, March 18, 2014.)

Regardless of who is to blame, Tesla must cease selling cars directly to consumers as of April 1.

Sales of the battery-powered vehicle, priced from about $70,000, totaled at least 22,450 last year, based on figures previously released by Palo Alto, California-based Tesla. According to the company, this exceeded its sales target of 21,500. (www.Bloomberg.com, January 15, 2014).

Right now, it’s only a small part of the transportation puzzle, but one that’s expected to grow. As Craig Slass noted, “Tesla is the future and we have to support them.”

Joe Cappello is Director of Global Marketing for Rotor Clip Company.
Posted by Rotor Clip at 6:36 AM No comments: 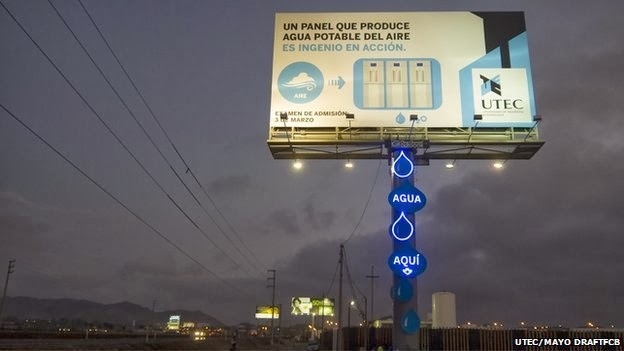 It's been a year and by now, you might have read about University of Engineering and Technology in Peru researchers' innovative way of combining marketing with true engineering genius in their Lima-based billboard that pulls water from thin air.

Peru has always suffered from a lack of moisture, making it at risk for drought conditions.   But its water conditions have worsened.  As this article from Time states:

"Because it sits along the southern Pacific Ocean, the humidity in the city averages 83% (it’s actually closer to 100% in the mornings). But Lima is also part of what’s called a coastal desert: It lies at the northern edge of the Atacama, the driest desert in the world, meaning the city sees perhaps half an inch of precipitation annually (Lima is the second largest desert city in the world after Cairo)."


The city relies on water that trickles down from the Andes, specifically glacier water.  However, with the effects of global warming, this water source evaporates faster and faster as years go by, eroding the supply for the fifth-largest city in the Americas.

The Lima Billboard, therefore, isn't just some marketing ploy that can draw foreign investment for the school's engineering department.  It may serve as a way for all cities to adapt to what is clearly going to be shifting weather patterns that will destabilize current societal infrastructure.  While those in the eastern regions of the US may scoff at the notion of moisture being scant, the western part of the country sees its real damage in the agricultural industry, the desertification of the Southwest states, and the ongoing coastal drought.  Traditional irrigation methods may not be as useful nor reliable as they once were, and the increasingly more difficult need to keep water in massive urban centers is becoming evident as one of the primary concerns of the 21st century.   Here's hoping in another year, every major city in the Western US has a billboard such as this.

Donal Thoms-Cappello is a freelance writer for Rotor Clip Company.
Posted by Rotor Clip at 7:55 AM No comments: