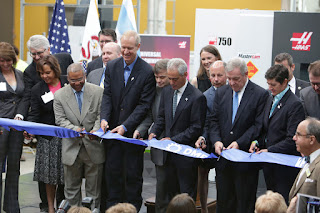 Back in October, we posted about the Revitalize American Manufacturing and Innovation Act, a bipartisan bill that allotted $300 million in public funds to combine with private money in creating 15 manufacturing "hubs" around the country. These hubs would be responsible for research and development that could serve in retraining workers and updating the manufacturing sector with needed technology and advancements.

This previous month, the first of those hubs finally made its grand opening. The Digital Manufacturing and Design Innovative Institute (DMII) of Chicago held its opening ceremony on May 11th, with Mayor Rahm Emmanuel, Illinois Senator Dick Durbin and Governor Bruce Rauner on hand to cut the ribbon. DMDII is a 94,000 square foot space, brought to life from the ashes of Republic Windows, a factory that closed in 2008 and took 200 local jobs with it. 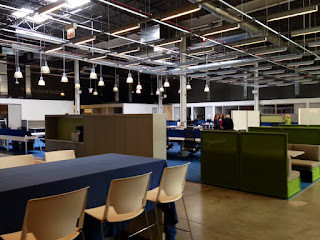 With the help of $70 million from the RAMI Act and $200 million in private investment, as well as resources provided by the University of Illinios, DMDII hopes to become a place where the research-heavy world of 21st century digital tech meets the infrastructure of US manufacturing. Multiple projects are slated to use DMDII as a way of finding new ways to integrate new advances in tech, like smart data or personalized software, into existing machinery and roles for employees. Here, UI's vocational program-UI Labs-can also test new methods, gadgets, and products that may move from the student mind to the factory floor much faster than before. Make no mistake, however; DMDII is not serving as an extension of a university, so much as a makerspace for multiple organizations that span different industries. The hope is that by sharing space and resources, people and firms alike can enjoy more industrial cross-pollination. Out of collaboration, successful ideas can be practically implemented faster and on a larger scale. A documented 20 projects have already been submitted and 5 have been approved for funding, with the expectation that they will not only result in success, but success that can be mimicked in other cities and environments.

DMDII will also share its hub space with City Works, a UILabs initiative that will deal specifcally with urban infrastructure renewal. City Works hopes to research and test many smart data pilots in the model of those proven successful in cities like Singapore.

The potential Chicago's "manufacturing hub" holds is promising, and put in the context of 14 other hubs not even finished yet, the 21st century is closer than ever.