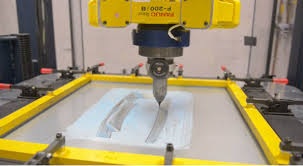 I'm honestly shocked 3D Printing isn't the first thing mentioned in the news every evening as a top story (of course there's a lot of things I wish were mentioned more in the news, but I digress).  The gains made by the new technology- the consequences because of it- are so many, it's like a perpetual Christmas Day for the futures market.  Literally every aspect of industry as we know it will change within the next decade.

Maybe sooner, in light of the recent method Ford Motor Company has developed over the past year and a half.  Dubbed the Ford Freeform Fabrication Technology (F3T), the model borrows heavily from the 3D printing process to create a whole new process of cutting sheet metal into prototype parts.  Two stylus-type tools cut a clamped piece of sheet metal in a synchronized movement to create a 3D version of the dimensions provided by the CAD data fed to them (you can see a promo video showing off the process here:) 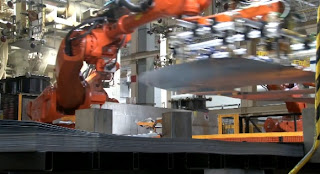 The F3T process is a consequence of a three-year, 7.04 million grant by the Department of Energy, developed specifically for advances in the manufacturing process. While this system cuts the delivery time of a prototype part from several weeks to several days, as well as eliminates the need for and energy expenditure of die engineering, it's not one nearly practical enough for use in bulk manufacturing.  This is mostly because having to customize the dimension of each contour machine and tool path takes way longer than the fraction of a second it takes for a stamping machine to turn a flat sheet into a 3D shape.  That significantly limits its value for now, but it's fast production of prototype parts makes it a technology we'll be seeing more of in the future.


A quick P.S.--Rotor Clip has been using 3D printing to make prototype tooling before producing the same parts from steel saving tool room and fabrication costs, and delivering prototype samples to customers faster than conventional methods.