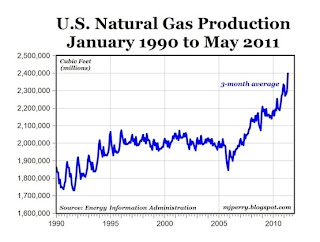 domestically are the issues it's caused for businesses overseas, especially Europe, where natural gas costs three-quarters more than here.  Consequently, the US natural gas landscape has very quickly become a magnet for foreign investment.   Many businesses are rather loudly musing about the possibility of expanding to the US, and a few have already moved to outright action:

BASF, the massive chemical corporation based in Ludwigshafen, Germany, has announced its intention to further expand investments in North America, citing cost advantages in keeping production near cheap, natural gas as a factor.  The company has already shifted $5.9 billion in investment to the US, as well as construction of a formic acid plant in Louisiana.  In addition, the Canadian Methanex announced back in January of plans to begin moving their Chilean facilities to Louisiana as well after coming to a partnership agreement with Chesapeke Energy Corporation to supply them with natural gas.  Austrian Voestalpine has also announced plans to build an iron-ore plant in Texas to take advantage of low prices as well.  It's estimated the plant will create 150 permanent jobs.


These developments are not just limited to the energy markets.  Natural gas is involved in the production power of pretty much every major industry worldwide, from plastics to steel to, of course, oil.  And while current prices may not continue, the natural gas boom is projected to be on course in
its current trajectory for quite awhile; music to the ears of corporations looking for staying power.  Investment potential is also in the interests of Asian-based businesses that are at the mercy of even higher gas prices than their European counterparts; this could very well be a migration trend that goes on well into the decade.

Conversely, it's important to keep in mind through all this that the gas boom is in a sweet spot where the gap between supply and demand is so vast, with resources so un-allocated, that it's only a matter of time before demand catches up.  More businesses, domestic and international, will mean more production, driving up prices.  In addition, the Obama Administration is also contemplating raising natural gas exports, which would lower rates overseas.  So far, however, none of this has been enough to discourage the companies that have already taken the plunge, clearly signaling widespread confidence across the global manufacturing landscape in the future of North American natural gas production.

Donal Thoms-Cappello is a freelance writer for Rotor Clip Company.
Posted by Rotor Clip at 2:26 PM